Our Origins
The St. Raymond Nonnatus Foundation was founded in 2015 by the Mercedarian Religious Order as an expression or application of their fourth vow in to "give their lives for those in danger of losing their faith". This vow springs from the fascinating and inspiring history of the first Mercedarians who gave their lives to redeem and rescue imprisoned Christians.

​As a means of continuing to give specific expression to this redemptive charism, the Order dedicated several years of prayer and dialogue during their formation assemblies.  Through the grace of the Holy Spirit and the intercession of St. Raymond Nonnatus, it was recognized the breakdown of the family as the major source of spiritual erosion in our day and time. The fruit of their discernment led to the establishment of the St. Raymond Nonnatus Foundation for Freedom, Family and Faith. The foundation is a 501-C3 non-profit organization included in the IRS group exemption for the United States Conference of Catholic Bishops (pg. 1083, 2018). ​
​ 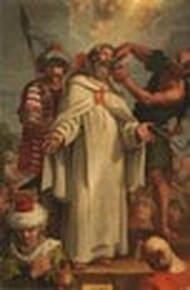 Our Saint
St. Raymond is universally known as Nonnatus (“not born”) due to his Caesarean birth. He is the Mercedarian saint who achieved the greatest popularity among Christians in the places, kingdoms, and nations where the Order of the Blessed Virgin Mary of Mercy became established.

According to the most reliable tradition, Saint Raymond was born in the town of Portello, situated in the Segarra region of the Province of Lérida at the dawn of the thirteenth century. He was given the surname of Nonnatus (not born) because he came into the world through an inspired and urgent incision which the Viscount of Cardona made with a dagger in the abdomen of the dead mother. In his adolescence and early youth, Raymond devoted himself to pasturing a flock of sheep in the vicinity of a Romanesque hermitage dedicated to Saint Nicholas where an image of the Virgin Mary was venerated. His devotion to the Holy Mother of Jesus started there.

He joined the Order of Mercy at a very early age and a student of the watchful first brother and Master of the Order, Peter Nolasco, and thus Raymond became a redeemer of Christian captives in Moorish lands. In a redemption which took place in Algiers, he had to stay behind as a hostage. It was then that he endured the torment of having his lips sealed with an iron padlock to prevent him from addressing consoling words to Christian captives and from preaching the liberating good news of the Gospel. After he had been rescued by his Mercedarian brothers, Pope Gregory IX appointed him Cardinal of the Church of San Eustaquio. Summoned by the Supreme Pontiff, Raymond was on his way to Rome when he met death in the strong and rocky castle of Cardona in 1240. The Order of Mercy, the viscount and the city of Cardona were all arguing over his dead body, and where it should be buried, it was entrusted to Divine Providence on the harness of a blind mule. Without anyone leading it, the mule accompanied by a crowd trotted to Saint Nicholas hermitage where the venerable body was buried.
​Our Mission
Pastoral accompaniment for families in crisis.

Our Main Focus
Targeting areas where family members may be in danger of losing their faith: 1. Families in Crisis  2. Marriages Enrichment
3. Catholics Affected by Divorce/Separation.

Our Ministry
Our services fall under four categories: PROGRAMS, PODCASTS and videos, PRIESTS as pastoral consultants, and PRAYER. We are unable to provide housing, financial, legal, medical or psychological counseling services.
Give A Dollar
Donate now